The 2000s saw an explosion of population-scale genome-wide association studies (GWAS). Seeing a need to accelerate and coordinate post-GWAS research to advance our understanding of the genetic architecture of cancer, NCI spearheaded the GAME-ON initiative.

This initiative, focused on five cancer types, brought together genetic epidemiologists and biologists, along with other disciplines, to build a cross-discipline collaboration to empower rapid replication of GWAS results and additional discovery, particularly in understudied populations.

The five cancer sites studied in the GAME-ON initiative are listed below. Descriptions of each project, and their publications, are available through the link in each bullet to NIH’s Research Portfolio Online Reporting Tools (NIH RePORTer). 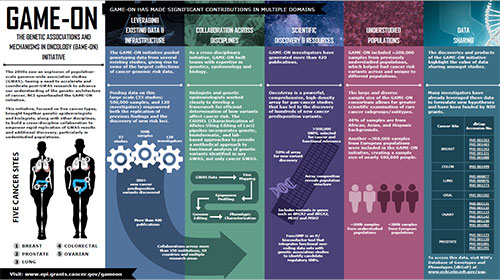 Learn more about the Genetic Associations and Mechanisms in Oncology (GAME-ON) initiative.

The GAME-ON initiative pooled genotyping data from several existing studies, giving rise to some of the largest collections of cancer genomic risk data.

Pooling data on this large scale (33 studies; 500,000 samples, and 128 investigators) empowered both the replication of previous findings and the discovery of new risk loci.

As a cross-disciplinary initiative, GAME-ON built teams with expertise in genetics, epidemiology and biology. GAME-ON included collaborations across more than 350 institutions, 60 countries, and multiple research areas. 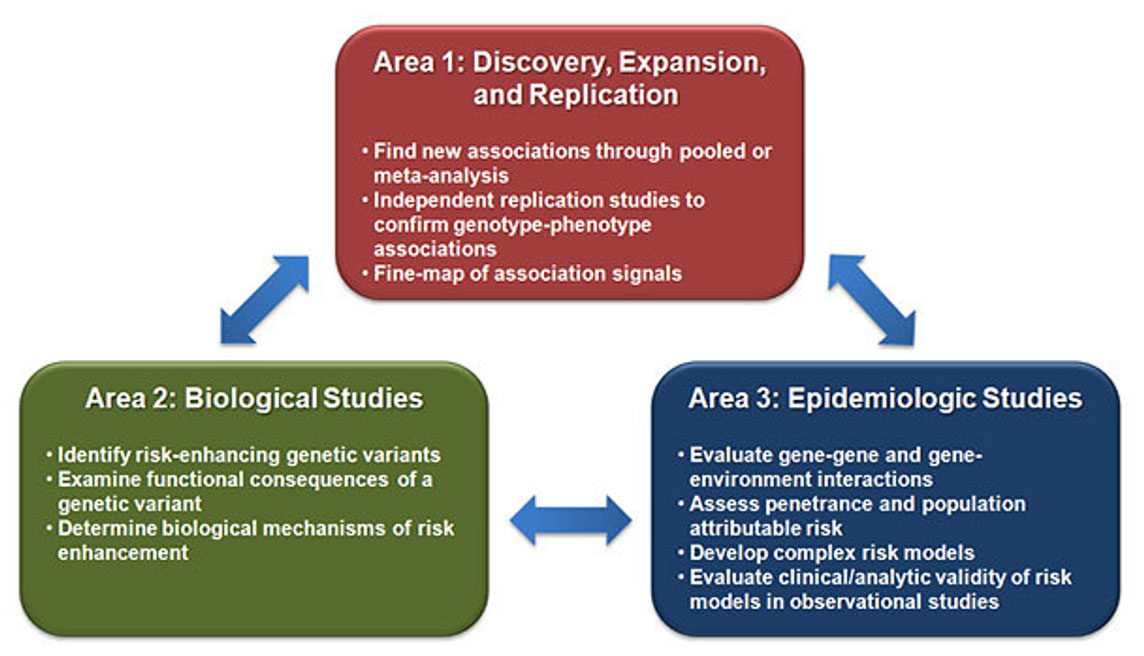 Biologists and genetic epidemiologists worked closely to develop a framework for efficient determination of how variants affect cancer risk. The CAUSEL (Characterization of Alleles USing Editing of Loci) pipeline incorporates genetic, bioinformatic, and lab-based approaches to provide a methodical approach to functional analysis of genetic variants identified in any GWAS, not only cancer GWAS.

GAME-ON investigators have generated more than 420 publications. GAME-ON researchers also developed datasets, tools and efficiencies that aided discovery within this initiative and beyond.

Have questions about this topic or need additional assistance?

For questions related to the GAME-ON grant awards:

GAME-ON included ~200,000 samples from  previously understudied populations, which helped find cancer risk variants across and unique to different populations. 40% of samples are from African, Asian, and Hispanic backgrounds. Another ~300,000 samples from European populations were included in the GAME-ON initiative, creating a total sample size of nearly 500,000 people. The large and diverse sample size of GAME-ON allows for greater scientific examination of rare subgroups and subtypes.

The discoveries and products of the GAME-ON initiative highlight the value of data sharing amongst studies. Below are links to data shared through NIH’s database of Genotypes and Phenotypes (dbGaP). Additional datasets will be added to dbGaP, so please check dbGaP for updates.

Many investigators have already leveraged these data to formulate new hypotheses and have been funded by NIH grants.