The Children's Nutrition Research Center's (CNRC) at the Baylor College of Medicine developed a food photography system to photograph precise portion sizes of a large number of food items to create quality standardized images used for dietary recall protocols. After the CNRC funding to take pictures ended, Westat began completing this work and followed the CNRC process with one exception. The CNRC used two different camera angles at the same time and Westat did not because it was determined that the simultaneous capture of two angle views was not necessary. Therefore, Westat used only one camera. Westat did, however, set up the option for two different mounting positions for the camera, since some food portions required side angle versus overhead views.

Further details about the CNRC's food photography system and the process for creating the image files can be found in the following article: 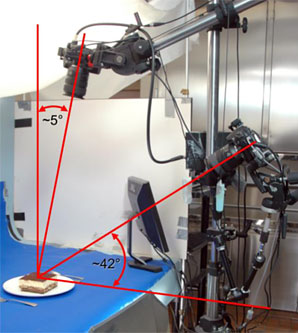 Two cameras were used, one shooting from above and one from the side. They were set up to produce images that visually matched in size. The cameras had AC adaptors to eliminate the need to touch the cameras to power them off and on, or change batteries. Both cameras used zoom lenses that were manually set and focused.

The top camera was 86.36 cm from the focal point to the film plane. The lens was set at a focal length of 40mm. The camera was set at an angle of 5° from vertical to eliminate reflections of the camera from showing on the photographs.

The side camera was 91.44 cm from the focal point to the film plane. The lens was set at a focal length of 42mm. The camera was set at an angle of 42° above the tabletop. The angle was based on previous studies concerning the ideal angles for food portion recognition (reference).

The height of the upper camera's position made it necessary to use a viewfinder projector that projected light into the camera's eyepiece and out through the lens of the camera onto the subject. This allowed for initial focusing and then the ability to view the image frame without disturbing the camera. The light was obscured when the shutter is released and did not affect exposure. 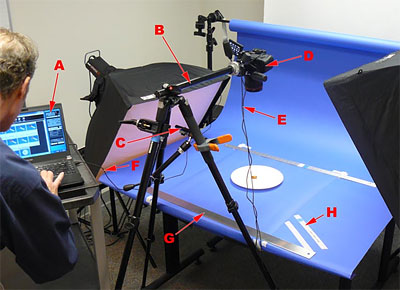 Images were recorded from either a 5° off-perpendicular overhead angle or an approximate 35° to 42° above-horizontal side angle, depending on what suited the food item best; simultaneously recording with dual angles like CNRC was not implemented. Those angles were relative to, or were measured from the perfect 0° overhead angle. The tripod's tilting center column mount was used for overhead shots, whereas the "Magic Arm" accessory, mounted on one of the tripod legs, was used for the other angle that was closer to a side or profile view.

The exact distance from camera to the food item and the exact focal length set on the zoom lens were not crucial since the final image size and item positioning in the frame could be regularized in the post-production phase using Photoshop. Regardless, the focal length and distance did not change during recording of a related food item portion series. Since focal length of zoom lenses could be accidentally changed, it was helpful to use tape on the lens barrel to prevent movement.

Canon camera control software was used for most functions, including exposure and color balance settings as well as to preview composition and refine focus such that the photographer was not dependent on the camera's viewfinder or LCD screen. 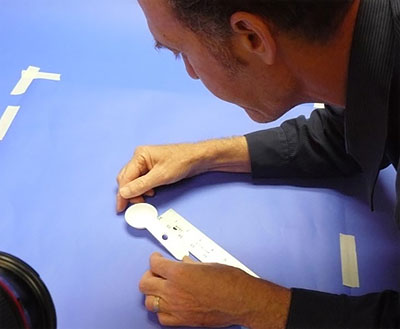 Lighting and Background used at CNRC

Food items were photographed in a light booth constructed upon a kitchen preparation table. The booth illuminated the food without harsh shadows by surrounding it with surfaces that either diffused or reflected light. The booth dimensions were 138-cm wide x 91.5-cm deep x 122-cm high, which was large enough to move food in and out without moving the setup.

Light was supplied from two photographic flash heads with integrated modeling lamps that supplied continuous light for composing the image. The flash heads were powered through cables from a central control unit. Each camera had its own sync cord to the central unit. The main light was a large lightbox suspended from above and slightly behind the top camera. It was additionally softened through another layer of diffusion material that formed the top of the booth. Fill light was supplied in front of the food by 2 inches of exposed umbrella reflector from under the table. The left and right sides were made from white matte board. Light stands supported the top and sides to form the front opening.

The cameras were white balanced from a white card sample inside the booth. The exposure settings were f22 at 1/125 sec as determined by the light meter for the film speed of 200 ISO. This provided adequate depth of field to capture the entire subject in sharp focus.

A background stand supported a paper backdrop that gradually curved from the back of the booth to cover the table surface. It was coated with chroma-key blue paint that allowed computer artists to quickly drop out the background and replace it with their own. It is the same process that weather forecasters use for their maps and graphics.

Lighting and Background Used at Westat

Two strobe units were fitted with "soft box" reflectors to which diffusing fabric panels were attached. Only diffusers that came with the strobe reflectors were used. The angles of the two units were not always exactly matched, as sometimes the photographer found it better to use both a lower and higher angle together to get better modeling (definition of depth and contour) of the food.

All food items were photographed on the chroma-key blue paper. The paper roll was approximately 50 inches wide. Rather than working directly on the blue paper roll's surface, the photographer found it much more convenient and flexible to use smaller sheets cut from the roll and taped in place in the shooting area. This approach made it easy to slightly reposition a grouping of items or to adjust an angle. It also made it easier to recover if a small amount of wet food or liquid tainted the paper surface. Paper cut from the roll had a strong tendency to curl so that sheets were weighted down by placing heavy metal straightedges on opposite sides of the paper.

Each camera connected to its own PC via USB cable. The camera software remotely controlled the cameras, and enabled images to be viewed on a large monitor while shooting for quality assurance. The software eliminated the need to handle the cameras to remove memory cards for downloading by recording the camera's image file directly to a folder on its PC. The files were transferred to a server for cataloging after each day's session.

The cameras shot ~ 3.0-mb JPEG files using the highest quality and image size settings. These files can be used for all types of output ranging from computer programs to publication quality prints. End users can process the images for their own specific needs. During the post-production phase, JPEG files were converted to PNG.

For every food item, each camera's shutter needed to be independently set off by a click of its PC mouse or by its attached electronic shutter release cable. The image was displayed on the computer monitor situated next to the cameras. A monitor switcher was used to go from one camera's PC to the other. After confirming that both cameras images were good, setup for the next shot was able to begin. 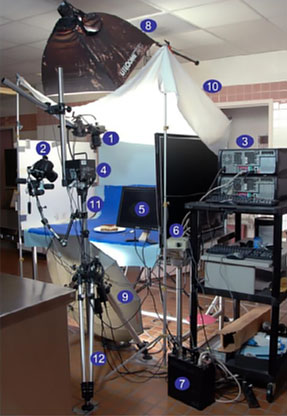 The CNRC approach was generally followed. Image quality was set to record both a raw uncompressed file and a JPEG file. During the post-production phase, JPEG files were converted to PNG. The camera was set to record both to the laptop's drive and to the camera's memory card as a backup. Triggering the shutter was done from the laptop, so there was no need for using either the camera's shutter button or a cord-attached remote shutter release accessory. Since the laptop was also connected via Ethernet cable to the company network, we could easily transfer files to a server location in batches rather than waiting until the shooting session was completed.

Standardization was achieved through using visual cues. These cues were the placement of the table setting items within the image frame. Each camera captured a reference image once the original camera settings and image composition were set. Minute registration marks were placed on the backdrop for realignment if necessary. Regular comparisons to the reference images were made in each photo session to ensure standardization. There was no need to change any part of the system unless the visual cues did not match.

To avoid disturbing the table setting while shooting, a second plate holding the food was placed on top of the reference plate. After confirming that both cameras images were good, the top plate was removed and the process was repeated. 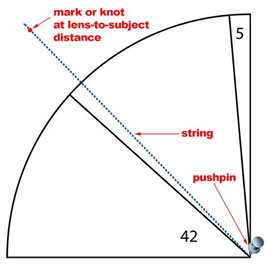 Consistent object placement was aided by a combination of tape marks, and an angle guide in the case of measuring spoons. Bits of tape were used to help with consistency of object placement, to mark either centers or just inside perimeters of objects. With spoon handles, a line of tape off to the side of the shooting area that represented the handle angle was placed. A foot ruler was used as a temporary extension to transfer that angle to the shooting area and aid the placement of the spoon.

A handmade oversized "protractor" was useful for standardizing angles and lens-to-subject distances. The protractor was made by printing out the simple black lines portion of the following diagram, adhering to foam core board, and then cutting it out. A string and pushpin attached to the bottom right corner aided in the transference of angle and distance to the setup positions. Knots or black marker dots on the string can be used to establish distances.


ASA24 is a registered trademark of HHS.